Americans and Brits will come together on Sunday December 15th to mark 75 years since the loss of 8 US Airmen who were on board the B-24 Liberator The Jigs Up.

A ceremony will take place in North Wales this Sunday, December 15, to mark 75 years since a tragic incident in which 8 US Airmen lost their lives when the B-24 Liberator, The Jigs Up, crashed into the Irish sea near Holyhead.

During the latter years of the Second World War, the US 36th Bomb Squadron were secretly working with the RAF to jam German radar. On December 22, 1944, following one such mission over Europe, the 10-man crew of the B-24 Liberator, The Jigs Up, were returning to land in the UK when they were diverted to RAF Valley, near Holyhead in the North of Wales, due to adverse weather. Although two other Liberators successfully landed at the air base, The Jigs Up had to turn around and attempt a second landing. As they approached the North Stack, just off the Welsh coast, the plane ran out of fuel. Under the belief that the plane was over land, the Captain, Lt Harold Boehm, told eight members of his crew to parachute out, however they were actually over the Irish sea and all eight were lost. Lt Boehm and his co-pilot, who also parachuted out, managed to survive, one landing at Holyhead and the other at Trearddur Bay. 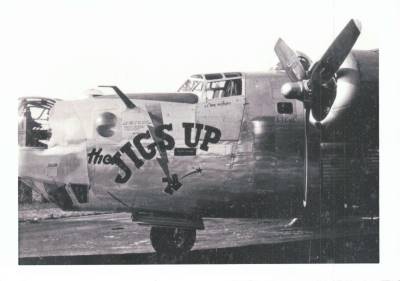 In the early 1990s, Stephen Hutton of North Carolina traveled to Wales to research more about The Jigs Up, a plane which his father, Iredell (see image below), had flown on many times as a tail gunner. An article published by a local newspaper in 1992 raised awareness of Mr Hutton's investigation, and not long after, Welsh diver Brendan Maguire retrieved two propellors from the floor of the Irish sea, and working with Stephen, a memorial was constructed to remember the sacrifice of those US Airmen. One of the propellors is now in the US, at the US National Museum in Fort Fisher, North Carolina, whilst the other was recently relocated in 2014 to the Breakwater County Park in Holyhead to create a more prominent memorial for those lost Airmen.

The ceremony will take place at 11am, at the Breakwater Country Park in Holyhead, on Sunday December 15, will mark 75 years since the incident. Jeff Evans, of the North Stack Memorial Group, will introduce the service and offer a background to the incident. Lt Col Thomas 'Shack' Graham, Deputy Air Attache at the American Embassy, will also attend as the Guest of Honor. The service will include renditions of the Welsh, English and US National Anthems, with wreaths being laid. Other attendees include Cllr Alan Williams, Mayor of Holyhead, Cllr Glyn Haynes, Vice Chair of Anglesey County Council, Rhun ap Iorwerth AM, and Group Captain Moon, Station Commander at RAF Valley.

Words from Stephen Hutton, who unfortunately cannot attend, will be read out by Brendan Maguire.

Thank you to Stephen, Jeff and Brendan for their work on this memorial, and for helping The American to tell this story. Their work in developing, preserving and protecting the memory of those eight US Service Personnel lost on December 22, 1944, is a shining example of the Special Relationship, and an important reminder at this time of year to pay tribute to those who safeguarded the freedoms we enjoy today.