A joint initiative by the Jack Brooks Foundation and HeroX is looking for solutions to improve voter turnout among US voters, both those living in and outside of America 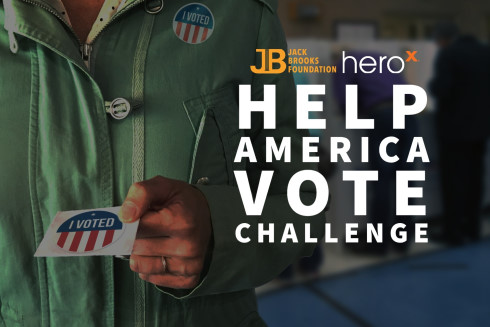 A competition has been launched by the Jack Brooks Foundation and HeroX which is aimed at finding new, innovative ways to improve voter turnout in America. The project, titled the "Help America Vote Challenge", is seeking submissions which propose "compelling, non-partisan approaches to improve voter turnout", and overseas Americans are being encouraged to participate.

The Jack Brooks Foundation (JBF), launched in 2019 in honor of the late Congressman Jack Brooks, is a non-profit organization which aims to develop initiatives to remove barriers to voting, inform voters and empower them.

The "Help America Vote Challenge" has been created in response to ongoing low voter turnout in the States. JBF say that "United States is well behind most of their peer democratic countries, with only 56% of the voting-age population casting a vote in the last presidential election. That percentage drops even lower in non-presidential elections".

The competition asks US Citizens to identify obstacles to voter participation, and then to suggest a non-partisan approach to reduce or eliminate those obstacles. The winning respondent will recieve a grand prize sum of $7,500, whilst the second and third prize winners will recieve $5000 and $2500 respectively.

Launching the contest, Jon Bassana, President and CEO of The Jack Brooks Foundation, explained that "Voting is the cornerstone of democracy, and we must motivate every American to engage in the voting process in every election". Speaking to The American, Bassana also noted the specific obstacles faced by overseas American voters, saying "Through the Help America Vote Challenge, the Foundation hopes to identify and resolve voter turnout obstacles impacted by geography, gender, age, socioeconomic status, and education. An American citizen living abroad likely has a unique perspective on the voting process as absentee ballots are the primary vehicle to casting a vote. We encourage anyone to share absentee voting solutions that could increase participation of the 2.9 million eligible voters overseas."

2020 has seen a growing focus on low voting turnout among overseas US Citizens, meaning the Help America Vote Challenge offers an opportunity for overseas Americans to submit potentially helpful ideas and solutions as part of a wider discussion to help Americans to vote.

The HeroX crowdfunding platform is being deployed as part of the competition. Responding to the launch, HeroX CEO Christian Cotichini said that "Exercising your right to vote is a democratic imperative ... Our crowdsourcing platform will help identify voter turnout solutions from across the US, which is, in essence, the most democratic way to improve our democratic process."

The competition is open to US Citizens, wherever they reside, who are over the age of 18. If you'd like to enter the contest, go to www.herox.com/helpamericavote. For more details on the Jack Brooks Foundation, head over to www.jackbrooksfoundation.org.