How MI5 and the FBI Brought Down the Nazis in America

Rhodri Jeffreys-Jones tells us about the fascinating story of a Ring of Spies in America ahead of WWII, and how British and American Secret Agents brought it down.

Rhodri Jeffreys-Jones is a Welshman living in Scotland who specialises in American history. In the UK, people ask him incredulously - ‘Why?’. He answers that his background is indeed Welsh - his father was a founder member of Plaid Cymru, the political party that advocates independence for Wales, and Rhodri is a native Welsh speaker. He grew up in Harlech. It’s not much more than a village now but has had the status of a town since 1284, when Edward I built the formidable castle - the inspiration for the world famous marching song, ‘Men of Harlech’. Incidentally, the Edwardian charter stipulated that no Jews and no Welshmen were allowed to live in the town precincts!

Rhodri’s fascination with America was generational - he came of age in the years when it was becoming apparent that the USA had come of age as a great power. When he was just 24, the University of Edinburgh offered him a temporary assistant lectureship in American History. He says “If you’ve ever visited the beautiful and cultured city of Edinburgh, you will understand why I am still here”.

Rhodri, your book, Ring of Spies, looks back at an important incident in the late 1930s where a Nazi spy ring in America was brought down by the FBI and the British MI5. Why did you decide to tell this particular history?

I stumbled upon one of my major characters, Jessie Jordan, when writing In Spies We Trust, a history of the British-American intelligence relationship. Jessie was a hairdresser in the Scottish city of Dundee, where she received and forwarded correspondence between Germany and its spies in the United States. The 75-year Scots-law confidentiality rule had just been lifted on the papers connected with her trial. It was great fun to inspect them in the vaults of Scotland’s old (pre-1707) parliament building.

MI5 was secretly reading Jessie’s letters. Discovering that there was a plot endangering the life of a US Army officer in New York, it tipped off the FBI who put ace detective Leon Turrou onto the case. In 2013 I applied, through the US Freedom of Information Act, to see the American papers on the matter. Jon Russo of the FBI Information Management Division was enormously helpful, and over a two-year period sent me thousands of documents. They revealed a fascinating story that I just had to tell. 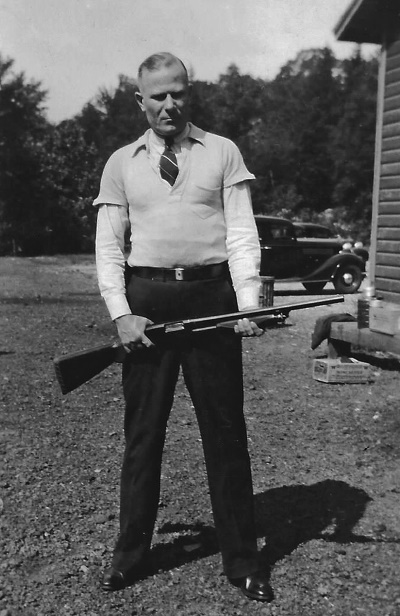 At the time, the US had just passed two important neutrality acts - what was America's perspective on Europe and the brewing tensions at the time?

The neutrality laws of the mid-1930s reflected Americans’ desire never to be involved in a European war again. That era’s historians were revisiting the idea of German war guilt, coming to the conclusion that Germany was not the only country at fault for the outbreak of war in 1914. There was concern that Germany had been too heavily punished at the Versailles Peace settlement of 1919, and that forcing the defeated country to pay reparations helped ruin the economy and boost fascism and the rise of Hitler. Finally, especially in the wake of a Senate inquiry between 1934 and 1936, there was suspicion that US businessmen, the ‘merchants of death’, had profited from the war - hence the neutrality acts’ prohibitions on US trade with belligerent powers.

What was the relationship between the UK and US secret services during those years?

Close. The secret services in both countries had been greatly reduced after World War I, but the bonds between them persisted. In the War of 1898, the British had come to the assistance of the US Secret Service by expelling a nest of Spanish spies from Montreal, and in 1917-18 there were joint counterintelligence operations in North America, and exchanges of military intelligence on the European battlefront. There was some friction. The British Admiralty would not hand over its codebreaking methodology, and ‘twisting the lion’s tail’ was a traditional American pastime. But there were predominantly good relations between the two countries’ intelligence officers. They shared a similar outlook, spoke almost the same language, and visited each others’ private clubs.

You mentioned the Scottish spy Jessie Jordan and the book points out a precarious situation when MI5 and then the FBI find out about Jessie's work - how tense were the political stakes in terms of US/UK/German relations?

This question feeds into political tensions on each of the Atlantic. In both countries, there were people with a vested interest in keeping friendly with Hitler and therefore suppressing the potentially embarrassing spy case. In the US, critics of the ‘anti-interventionists’ called them ‘isolationists’. In the UK, critics used the even more loaded term, ‘appeasement’. In both countries, though, there were Hitler haters who wanted to dynamite the isolationist-appeasement policy. The MI5 tip-off lit the fuse. It was a real problem for President Franklin D. Roosevelt, as mid-term elections were coming up in the fall of 1938, and he could not risk being seen to be aggressive toward Germany.

How did the relationships of the UK and the US develop during the course of the case?

Berlin’s ambassador to the United States, Hans Heinrich Dieckhoff, thought that a Golden Age of US-German relations had dawned by the mid-1930s. He, as well as other senior German diplomats, saw the spy case as the disaster that changed all that. Public opinion polls started at around this time, so we know that popular support for neutrality plummeted by the end of 1938, and American opinion of Germany was heading toward rock bottom. German atrocities in Europe help to explain that, but Dieckhoff was right in his assumption that Americans react to events at home - and the spy scandal was played out on American soil. One caution, though. Most Americans abandoned their neutrality, but very few were ready for war.

The book really is a spy thriller - were there any stories or events that particularly stood out to you when researching the case?

I guess the plot to neutralise the US Army officer, Col. Henry Eglin, qualifies as fare for a spy thriller. The bit I like is the plan for a German operative to stand on the windowsill of a McAlpin Hotel bedroom, ready to pounce on Elgin and administer the contents of a syringe disguised as a fountain pen.

But that’s probably trumped by the scheme to make a 'Mata Hari' of Miss Kate Moog. Kate claimed to have nursed FDR in the 1920s and to be acquainted with the hierarchy of the US national security pyramid (I’m afraid almost all of my characters are liars!). Kate travelled to Berlin to meet Admiral Wilhelm Canaris, head of Hitler’s foreign intelligence agency, the Abwehr. They hatched a plan to set up a no-expenses-barred ‘salon’ in Washington, DC. 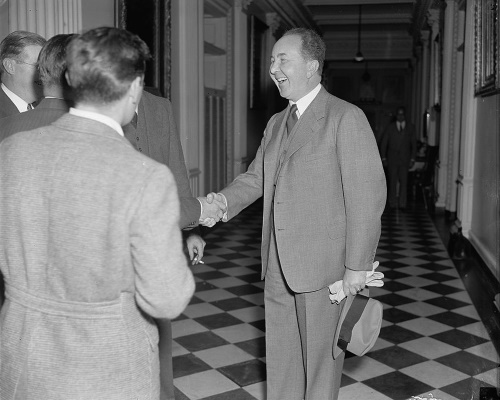 The trial of the spies took place in 1938 - how did it change American views of the issues developing in Europe?

That’s a very good question! I’m afraid I did not come across direct evidence on the issue and I think it would be difficult to obtain, but one could persuasively argue that the spy case jolted the ordinary citizen into thinking again about those Nazi atrocity news items being recorded in the newspapers and newsreels of the day. Talking of cinemas, Leon Turrou wrote a book about his experiences breaking up the Nazi spy ring, and Warner Bros. made a movie of the book. Confessions of a Nazi Spy (1939) starred Edward G. Robinson and had a huge impact on opinion, once again stirring people to look critically at what the Hitler regime was doing in Germany. The spy trial, pro-fascist and anti-Semitic demonstrations by the anti-interventionist America First Committee, and anti-fascist campaigning not just by Turrou and Warner Bros. but also by celebrities like Ernest Hemingway and Albert Einstein - these domestic events probably did sensitize people to foreign events to an unusual degree.

What is the legacy of the case in the context of the Second World War and ongoing US/UK cooperation?

Shocked by the spy case and its impact, Germany’s diplomats gave up on the idea that America might be a friend in world politics. Japan’s leaders must have realised that, and rightly gambled that Hitler would declare war on the US if Japan attacked the US fleet in Pearl Harbor. The irony is that the German diplomats, who came from an undemocratic country, placed huge store on the significance of public opinion in democratic America.

As to US/UK cooperation: FDR entrusted FBI director J. Edgar Hoover with boosting US counterintelligence in the wake of the 1938 spy episode. One of Hoover’s first actions was to send a mission to the UK to find out how we do things here. That was the start of a massive cooperation on the intelligence front, and military cooperation ensued. A bit of a warning, however: Americans had their own intelligence tradition. The British did not teach them everything - for example, US codebreakers were already beginning to use IBM computers. 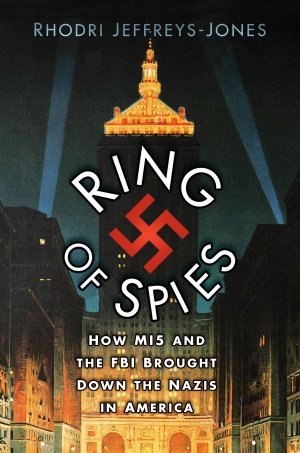 What do you hope readers take away from the book?

I hope that readers will agree that Leon Turrou, a hitherto fairly neglected figure, was one of America’s greatest and most influential detectives. And I hope that those interested in the causes of US entry to the Second World War will find some space in their thoughts for the impact of the spy case, and of the way in which Germany perceived it. Finally, a thought that arises from the riches contained in the archives of the FBI. They were the source of so many vivid details. I do hope that I have done them justice, and that readers will enjoy the book.

What's next on the horizon for you?

Finally, what's the best thing about being Rhodri Jeffreys-Jones?

When at the University of Michigan in 1964-5 I played for its rugby team, and we reached the North American knockout final. The venue was an outlying part of Soldiers Field, Chicago, and the opposition a team from southern Ohio called TriCities. The best thing about being Rhodri Jeffreys-Jones would be the memory of the try I scored that day ...were it not for my wholly undeserved good fortune of having a wonderful family.

Rhodri's book, Ring of Spies, is published by The History Press, and is available to Buy Now 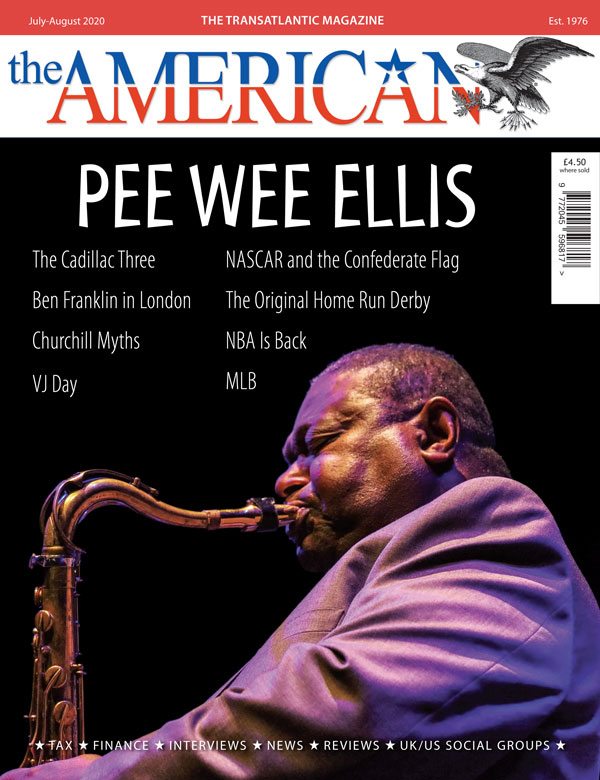