Americans in Edinburgh for 2019 Festivals

A must-visit. Every second small town in Britain seems to have started a ‘Fringe’ but the Edinburgh Festival Fringe is the original and the best. The world’s largest festival of art, it attracts artists from around the globe. Over 25 days, from August 2 to 26, you can choose from 55,000 performances of more than 3,500 shows. The Fringe is best known for comedy, cabaret, variety and street performances but also features theater, musicals, dance, physical theater, circus, spoken word, exhibitions, children’s shows and live music. The Fringe started as a sideline to the ‘proper’ Edinburgh International Festival, which focused on more serious theatrical and musical productions. Here’s our selection of American shows at the two festivals. See www.edfringe.com and www.eif.co.uk for dates and times.

Desiree Burch is Coming Early!
Heroes @ The Hive
The fresh-faced/world-weary comedian, seen on many UK TV shows, mischievously changes up the tempo. Every comic has a relationship show but what happens when that relationship’s with the one person you were most trying to avoid? One isn’t prime or perfect. But it is magic!

The Living Room - A Comedy of Grief
Assembly Rooms - Front Room
Confined to The Living Room, two Accountants of Death work tirelessly to record the death toll. The occupational hazards wear on these two clowns as they learn the meaning of life and death. Developed at The Lyric Hyperion Theatre in Los Angeles, this show rides the very fine line between comedy and tragedy. It received 'Pick of the Fringe' at the Hollywood Fringe Festival. Employing audience interaction, physical comedy and absurdist theatre techniques, it leaves the audience laughing and crying and thrust out into the night to ponder it all.

Amazing Bubble Man
Underbelly, George Square
Louis Pearl has been thrilling audiences worldwide for over 30 years with the art, magic, science and fun of bubbles. An Edinburgh Fringe favourite, he has sold out there for the last 12 years. Louis explores the breathtaking dynamics of bubbles, combining comedy and artistry with audience participation and enough spellbinding bubble tricks to keep everyone mesmerised (some shows with live music). 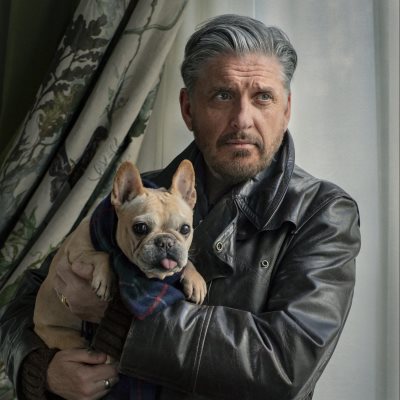 Craig Ferguson: Hobo Fabulous
Gilded Balloon at the Edinburgh Playhouse
A dual US-UK citizen since 2008, the Grammy-nominated, Emmy and Peabody Award-winning star of CBS’ The Late Late Show with Craig Ferguson and SiriusXM’s The Craig Ferguson Show brings the wildly successful Hobo Fabulous home to Scotland for its European premiere, marking Ferguson’s first UK stand-up show in over 25 years! Featuring 100% all-new material for one night only at the Edinburgh Playhouse. Of his return to Edinburgh, Ferguson said: ‘What the world needs now more than ever is an ageing, unhinged vagrant traveling from place to place ranting nonsense into a microphone!’

Escaping Trump’s America
Frankenstein Pub
Back for a third year, hang out with a hilarious lineup of American comics each night as we all enjoy our month away from the craziness back home. Come drink, watch and laugh! Featuring comedians Shafer Ward, Franco Danger, Kate Nichols and Gordon Baker Bone, along with different pro guests each night.

Trump Lear
Pleasance Courtyard
Last year’s ‘chaotically enjoyable’ (Spectator) sell-out hit Shakespeare adaptation returns. Actor and impersonator Carl David – aka David Carl – is locked up for performing his hilarious Trump-inspired version of Shakespeare’s King Lear. Forced to play for an audience of one – the President himself – Carl’s life depends on making the bard great again and giving the performance of a lifetime without offending the audience.

I’m Afraid of Americans
C venues – C viva
Comedic musings from an American artist who moved from Ohio to Brooklyn to Iceland. Discussing the current political state of the USA and how it has affected the ways in which people from around the world view Americans. Other topics include: living with Icelandic elf-people, dating as a bisexual, going to jail in America and traveling all over this wonderful planet. A perfect show for Americans who don’t take their country or government too seriously.

American Performing Arts International
theSpaceTriplex / theSpace @ Symposium Hall
Musicals, opera, theater and a children’s show from the US group: All I Really Need to Know I Learned in Kindergarten; Best of Broadway; Best of the West End; Death of the American Teenager; Lost in a Book; Self-Check; Sometimes, Just a Second.

1 Chick, 2 Dicks: 3 Americans Get Too Personal
Just the Tonic at The Caves
Unsurprisingly 18+ (there’s a clue in the title!). How personal is too personal? What topics are off limits? US comedians Jeanne Whitney, Carter Morgan and Mike Lemme met in Paris trying to answer those questions. In this unique American comedy club style show, the comedians take turns hosting, featuring and headlining every night to give the audience a fresh experience. Don’t miss this rare opportunity to get intimate with three Americans at the Fringe. You’re not as crazy or alone as you think. 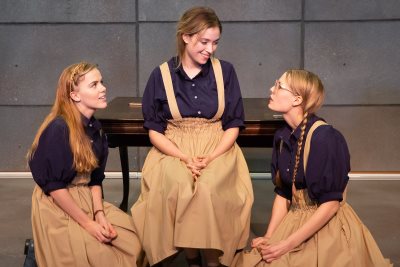 Hitler’s Tasters
Greenside @ Infirmary Street
A dark comedy about the young women who had the “honor” of being Adolf’s food tasters. Based on true events, it is anachronistic retelling of an historical footnote, exploring the way girls navigate sexuality, friendship, patriotism, and poison during the Third Reich, waiting to see if they will survive another meal.

Lucie Pohl’s Immigrant Jam
Gilded Balloon Teviot
NYC comedian Lucie Pohl - creator of Edinburgh and off-Broadway hits Hi, Hitler, Cry Me A Liver, Apohlcalypse Now! and voice of computer game Overwatch’s Mercy - wants to be really really real and brings a show about being a video game celebrity with a bathtub in her kitchen.

Manual Cinema’s Frankenstein
Underbelly, Bristo Square
Stories of Mary Shelley, Victor Frankenstein and his Monster expose how the forces of family, community, and education shape personhood or destroy it by their absence. The Chicago-based multimedia company stitches together Mary Shelley’s biography and her classic tale to create an unexpected story about the beauty and horror of creation, combining handmade shadow puppetry, cinematic techniques and innovative sound and music.

Jena Friedman: Miscarriage of Justice
Assembly George Square, Studio 5
The US comic makes her long awaited return to the Fringe to celebrate free speech in America with an unapologetically political hour of comedy.

Indigenous Contemporary Scene
The Studio/CanadaHub/Summerhall
Kiinalik: These Sharp Tools - Inuk artist Laakkuluk Williamson Bathory and Toronto queer theater-maker Evalyn Parry share the stage, exploring the advancing threat of climate change. European debut.
Deer Woman - a one-woman play about a Blackfoot woman seeking vengeance for the murder of her younger sister and the thousands other Indigenous women recorded as missing or murdered in Canada in recent decades.
Songs in The Key of Cree - a compilation of tunes written over the past thirty years by Cree-Canadian playwright/ songwriter/pianist Tomson Highway, named by Canadian magazine Maclean’s as ‘one of the 100 most important people in Canadian history’.
Lara Kramer - The Ojii-Cree dancer and artist brings three works which explore the past, present and future; highlighting that to care for the next generation we must look at the past and the cyclical nature of everything being interconnected.
Native Girl Syndrome - a dive into street culture takes the audience on a dynamic journey of addiction, loss and alienation.
This Time Will Be Different - co-created by Emilie Monnet, is a performance-based installation that denounces the Canadian government’s present discourse on Indigenous peoples and offers an inter-generational ceremony to celebrate beauty and survival.
Miijin Ki - a word in the Anishnabemowin language meaning ‘Eating Land’, is a work in development in which Kramer and her collaborators create a non-violent future of living and being on the land.
Kanata Cabaret Hour - A showcase of the many Indigenous artists in Edinburgh offering a radical mixture of dance, music and live art from Indigenous and Scottish perspectives. ‘Kanata’ is the Haudenosaunee word for Canada. 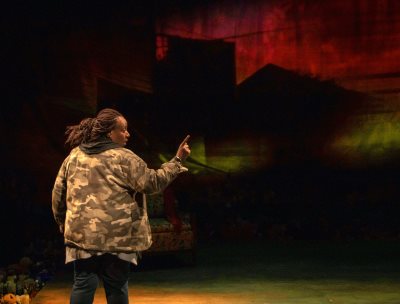 Until The Flood
Traverse Theatre
Until The Flood explores the dark forces of American history, race and politics that exploded in the streets of Ferguson, Missouri and sent shock waves across the nation. A European première, written and performed by Pulitzer Prize nominee Dael Orlandersmith. The production is the first by Arcola Theatre at the Edinburgh Festival then transfers to the Arcola in London in September. On August 9, 2014 a white police officer shot and killed Michael Brown, an African American teenager in Ferguson, Missouri. The shooting ignited weeks of social unrest, propelled by the activist movement known as Black Lives Matter, and prompted a controversial investigation by the US Department of Justice. Orlandersmith interviewed dozens of people who were shaken by the shooting and its turbulent aftermath and created eight unforgettable characters who embody a community struggling to come to terms with the personal damage caused by these complex events.

Amadou & Mariam + Blind Boys of Alabama
Usher Hall
American gospel voyages back to its African roots as Mali and the American South come together in this compelling collaboration between two of today’s greatest world music groups. Malian duo Amadou & Mariam have been producing hits since the 1980s, spanning genres from Afro-pop to global dance. Living legends in gospel music and winners of five Grammy awards, the Blind Boys of Alabama came together as children in 1930s America. They have been spreading their rapturous gospel songs worldwide across more than seven decades since.

Sharon Van Etten
Leith Theatre
Emotionally raw harmonic melodies abound on New Jersey songwriter Sharon Van Etten’s songs of love and loss. Her new album Remind Me Tomorrow, her fifth, has been described as her best work to date. Switching her guitar for a piano and synthesizer, she veers towards the driving, dark glimmer moods that have illuminated the edges of her music. With curling low vocals and brave intimacy, she provokes our most sensitive impulses: reckless affections, spirited nurturing, and tender courage.

Roots
Church Hill Theatre
The graphically glorious 1927 group return to the International Festival with the European premiere of brand-new show Roots. Witty, stylish and subversive, 1927 blends sophisticated stagecraft with the early days of cinema, all brought to life through the company’s signature fusion of handcrafted animation and storytelling, with a live musical score involving donkeys’ jaws, musical saws and Peruvian prayer boxes. The company has unearthed a catalogue of thousands of little-known folk tales, that offer a fascinating glimpse into the imaginations of our forebears.

Jeremy Denk
The Queen’s Hall
International Festival debut with a wide-ranging programme to include works by Bach, Ligeti, Liszt, Berg and Schumann. A rare piano talent, Denk is the winner of numerous major international awards including a MacArthur ‘Genius’ Fellowship.

Joyce DiDonato sings Berlioz with National Youth Orchestra of the USA
Usher Hall
The flamboyant, captivating, constantly surprising, Kansas-born mezzo soprano Joyce DiDonato is one of today’s classical music giants, with a personality as vibrant and joyful as her breathtaking voice (and a former cover star of ours!). She joins the Carnegie Hall-based National Youth Orchestra of the USA for the sultry opulence of Berlioz’s six ravishing love songs of summer evenings.