Marianne (Zoe Wanamaker) and Roland (Peter Capaldi) meet at a barbecue and fall in love, or they barely speak, or they flirt, and nothing comes of it. As the same scene recurs, different outcomes happen and every tiny choice that is made, or not as the case may be, creates a different universe to the one that previously existed. Key milestones in a love affair such as sleeping together or breaking up are marked by slight variations in a movement or choice of words. Are you keeping up?

Nick Payne’s hit play was inspired by elements of string theory (Marianne is a Theoretical Physicist) and ideas about colony collapse (Roland’s a beekeeper) and in it he attempts to explain how at any given moment several outcomes can exist simultaneously and at the more mundane personal level, how the progress of a life can create infinite possibilities which can turn on a split second decision (like I wasn’t going to go out that night I met my life partner) so, therefore, do we have free will or is everything pre-destined?

It’s 70 minutes long and has always been carefully cast with stars (Sally Hawkins and Rafe Spall in the West End premiere in 2012, followed by Jake Gyllenhaal and Ruth Wilson’s smash hit on Broadway) and I suspect this better explains its enduring international appeal than whether it gets the Quantum Mechanics exactly right. Like Yasmina Reza’s Art, it flatters us, but we get to dinner early. It’s a sugar rush of ideas delivered by rather attractive teachers.

This is a pet project for Michael Longhurst, who co-created the original at the Royal Court and is now the supremo of the Donmar Warehouse. Tom Scutt’s beautiful original design, a honeycomb parquet floor surrounded by a sea of white balloons is recreated here and is pure simplicity in action. However, in a clever move here, Longhurst has decided to explore how the play might fit with a pairing other than a white thirtysomething couple.

Each couple will obviously infuse the text in different ways, and it will be great to come back and compare, but one wonders if the central conceit hasn’t been stretched too far here. Wanamaker’s prickliness and Capaldi’s natural moroseness do jar with the baked-in romantic youthfulness of this piece. Both are veterans with great stage presence, but they often seem here as if one is watching a rehearsal where the emotional punches have yet to land.

Longhurst’s stripped back staging allows for a hectic pace, with a photoflash indicating the rapid scene (or universe!) changes. The challenge for the actors, with all this, is to sufficiently delineate the scenes that are same except for a minor element. In the rush clarity is sometimes sacrificed, as is the important need to get really under their skin, to get invested in them. For once you want a play to be longer and slow down. 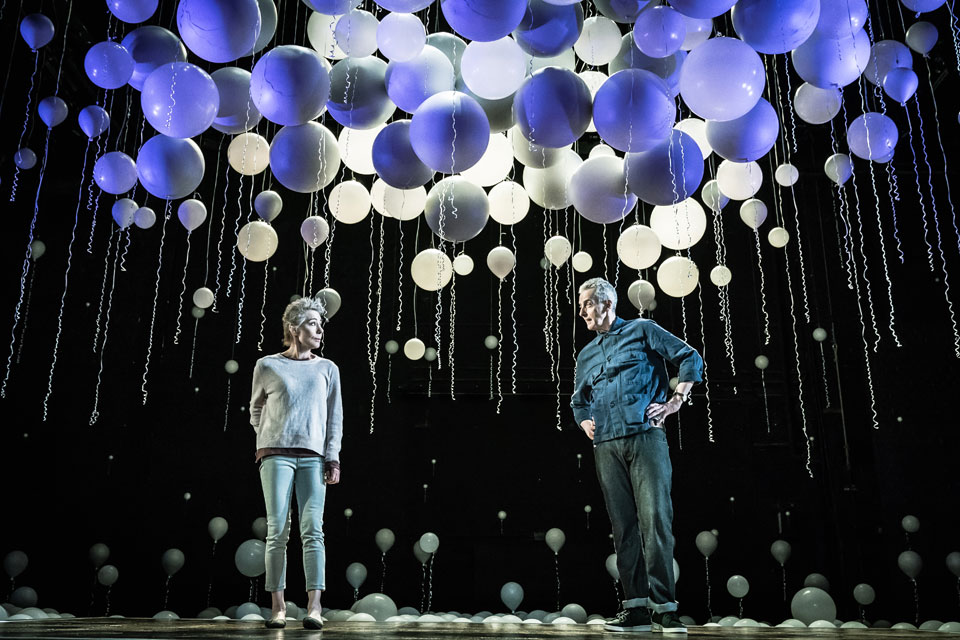